American Farm Mortgage & Financial Services is a wholly owned subsidiary of Legence Bank, a strong century-old agricultural bank located in southern Illinois. Our company specializes in real estate secured farm and ranch loans, along with additional financial products and services. American Farm has strong relationships with secondary market purchasers and participants, which enables us to offer an extensive range of products to fit many agricultural real estate financing needs.

Since our founding in 1989, we have provided quality agricultural real estate loans, leasing products, and other related services to farmers across the United States. American Farm is an FSA Preferred Lender for guaranteed loans through the Farm Service Agency (FSA), a division of the United States Department of Agriculture (USDA). In addition, American Farm originates and services agricultural loans for the Federal Agricultural Mortgage Corporation (Farmer Mac), among other investors.

American Farm's mission is to provide farmers and ranchers with a knowledgeable, efficient, competitive and friendly source for their financing needs. Our team is committed to providing outstanding service and resources to assist customers in achieving their operation's goals.

At American Farm, we understand the unique needs of each farmer. We offer agricultural loans designed specifically for you and your operation, with flexible terms that best fit your financial needs. American Farm is a nationally recognized leader in agricultural real estate lending. You can put your trust in our company.

Learn About the History of Legence Bank (Our Parent Company)

At the turn of the twentieth century when coal mining flourished in Saline County, IL, John Davenport and H. E. Willis of Harrisburg joined brothers S.C. and P.H. Galeener of Eldorado to form a financial institution behind the façade of a small storefront at 1340 Locust Street in downtown Eldorado. On July 14, 1906, the First State Bank received a charter, making it the First State Bank in the township of Eldorado and, ultimately, the oldest State Bank in Saline County.

Immediately thereafter, the founders of the newly created bank purchased a parcel of land, including a small wooden building, on the "five-way" corner of Fourth and Locust Streets in Eldorado. First State Bank has occupied the sturdy, two-story brick building built there for over 100 years, qualifying it as one of the oldest buildings in Eldorado and the second oldest business in town. This main facility has sustained a few cosmetic changes, including removing a horse trough from the outside of the bank's entrance to make room for progress (paving the streets in 1910), and, more recently, remodeling for additional executive office space and work areas.

While these facts may afford First State Bank a stellar place in the world of antiquity, the Bank's stockholders and employees continue moving confidently into the future. 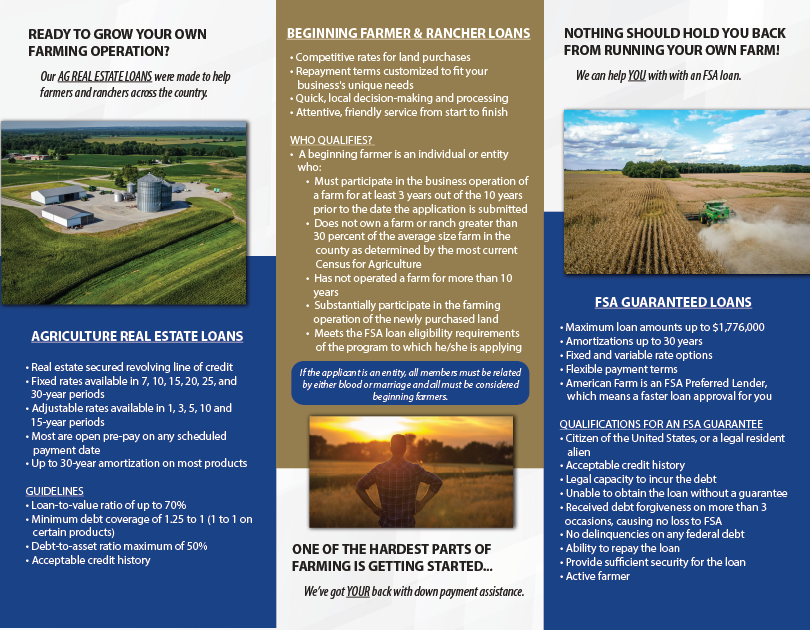 The Bank's board, management and staff are excited about the future and our strong growth prospects. With over a century of history and a legacy of caring, personal service, Legence Bank is forging ahead into the future, continuing its strategic goal of providing the communities it serves with a premier financial institution and state of the art technology and conveniences, while remaining independently owned and committed to our most valuable asset: our CUSTOMERS!

Get the latest on the ag industry, what we’re up to, and when the next events are.

It’s a great, easy way to stay up on what’s going on at American Farm Mortgage.